Stay up to date on the latest nutrition information with USA Rice’s library of published research reports and overview one-pagers.

Using data from the National Health and Nutrition Examination Survey (NHANES), this study demonstrated consumption of rice baby cereal in the 0-24-month population was linked to better nutrient intake which leads to better overall health and lower risk of disease.

Using data from the National Health and Nutrition Examination Survey (NHANES) 2007-2008 and the Food Commodity Intake Database, researchers compared the diets of more than 8,000 adults and children who reported eating rice versus those who reported not eat rice, for important health parameters including obesity risk, cholesterol levels, energy intake, major vitamin and mineral intakes, weigh status, blood pressure, diet quality, and serum folate level for adults 20 years and older. Results from the study demonstrates that individuals who consume rice are less likely to be overweight and enjoy a healthier diet than those who don’t consume rice.

The study showed that rice eaters, including children and adults, consume significantly more folate, iron, potassium, vitamins B6, B12 and A, thiamin, riboflavin, niacin, vitamin D, phosphorus, magnesium, copper and zinc. Rice eaters had a significantly higher energy intake, yet consumed a lower percentage of calories from fat and saturated fat compared to those who did not eat rice. In addition, adults who eat rice are less likely to be overweight or obese and have a smaller waist circumference. Rice consumers had lower waist circumference, triceps skinfold, and were significantly more likely to have a body mass index less than or equal to 25.

Using data from the National Health and Nutrition Examination Survey datasets (2005-2010), researchers evaluated the association of rice consumption with overall diet quality and key nutrient intakes in a nationally representative sample of 14,386 U.S. adults. The results showed that adults who eat rice had diets more consistent with what is recommended in the U.S. Dietary Guidelines, and they showed higher amounts of potassium, magnesium, iron, folate and fiber while eating less saturated fat and added sugars. Eating rice was also associated with eating more servings of fruit, vegetables, meat and beans.

This research builds on two previously published studies that showed the positive contribution of rice to diet quality. A 2009 observational study using NHANES datasets and Continuing Survey of Food Intakes by Individuals (CSFII), found that rice eaters consumed significantly less fat and saturated fat and consumed more iron, potassium, fiber, meat, vegetables and grains. And a follow-up study in 2010, also using NHANES datasets, included children in the study group and further confirmed that rice consumption was associated with greater intake of a range of healthier foods and nutrients.

This research compared satiety—or a sense of satisfaction and fullness—in white rice, brown rice, and glucose beverage, a standard substance used for comparison in weight management and satiety studies. The research found no difference between brown and white rice. However, both were found to provide more satisfaction and sense of fullness compared to the glucose beverage, providing more proof that rice is an important part of a healthy diet.

Researchers used data from the Continuing Survey of Food Intakes by Individuals (1994-1996) and the National Health and Nutrition Examination Survey (2001-2002). To provide information about rice consumption in the United States and the diets of rice consumers. The research demonstrated that rice consumers choose a diet that includes more vegetables, a smaller share of energy from fat and saturated fat, more dietary fiber and more iron than those who do not consume rice; the differences have remained relatively stable over the last decade.

Give your clients the facts on the many benefits of rice. Our collection of rice research overviews provides key takeaways from recent studies in just one page each. 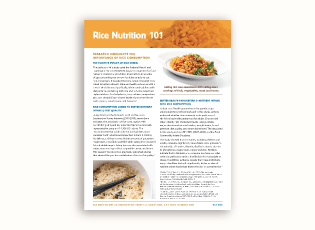 Recently published research highlights the positive impact of infant rice cereal consumption, takeaways from the 2020-25 Dietary Guidelines, and a summary of past rice research reports. 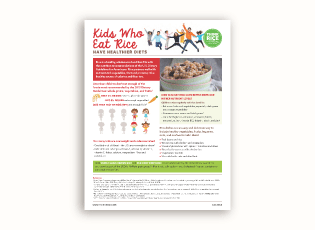 Rice is a healthy, wholesome food that fits with the nutrition recommendations of the U.S. Dietary Guidelines for Americans. Rice partners well with nutrient-rich vegetables, fruit and proteins; it’s a healthy source of calories and fibre too. 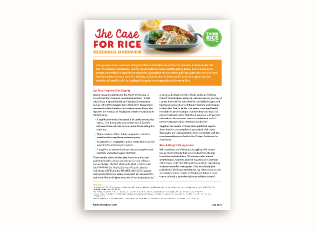 The Case for Rice Research Overview

It comes as no surprise that there is significant scientific agreement recommending whole grain rice and enriched, fortified white rice as a part of a healthy, balanced diet.